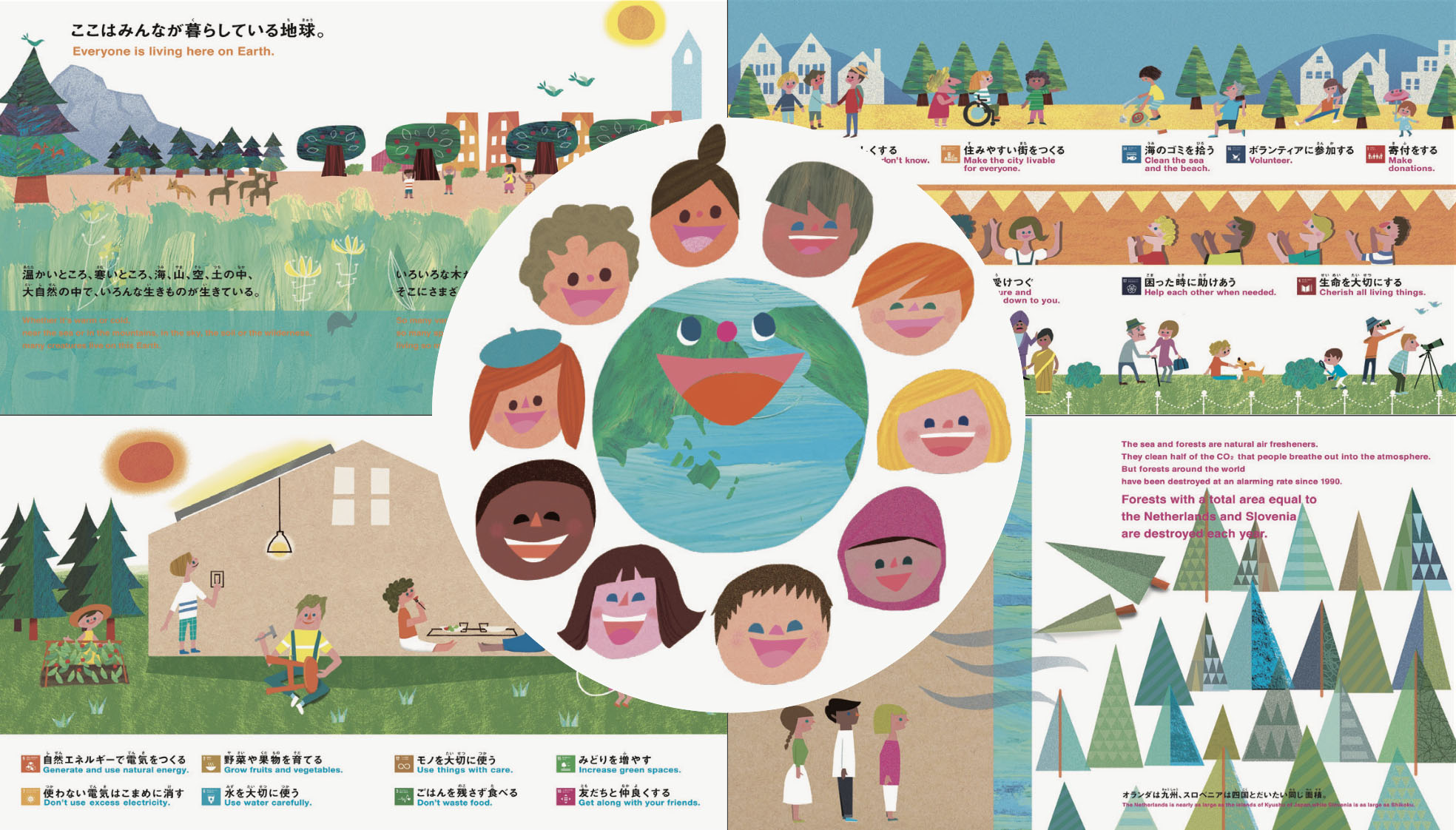 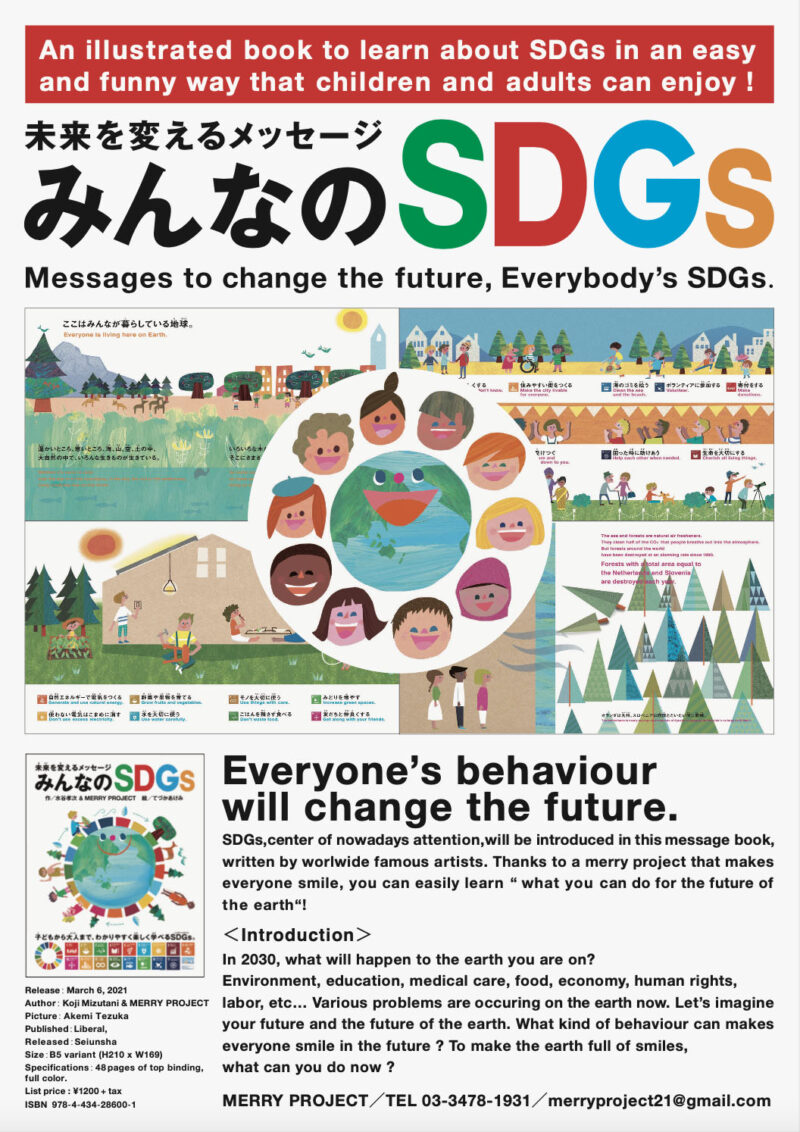 <An illustrated book to learn about SDGs in an easy and funny way that children and adults can enjoy!>
Messeage to change the future,Everybody`s  SDGs.

Everyone’s behaviour will change the future.
SDGs,center of nowadays attention,will be introduced in this message book, written by worldwide famous artists. Thanks to a merry project that makes everyone smile, you can easily learn “ what you can do for the future of the earth“!

<Introduction>
In 2030, what will happen to the earth you are on?Environment, education, medical care, food, economy, human rights, labor, etc… Various problems are occuring on the earth now.Let’s imagine your future and the future of the earth.What kind of behaviour can makes everyone smile in the future ?To make the earth full of smiles, what can you do now ? 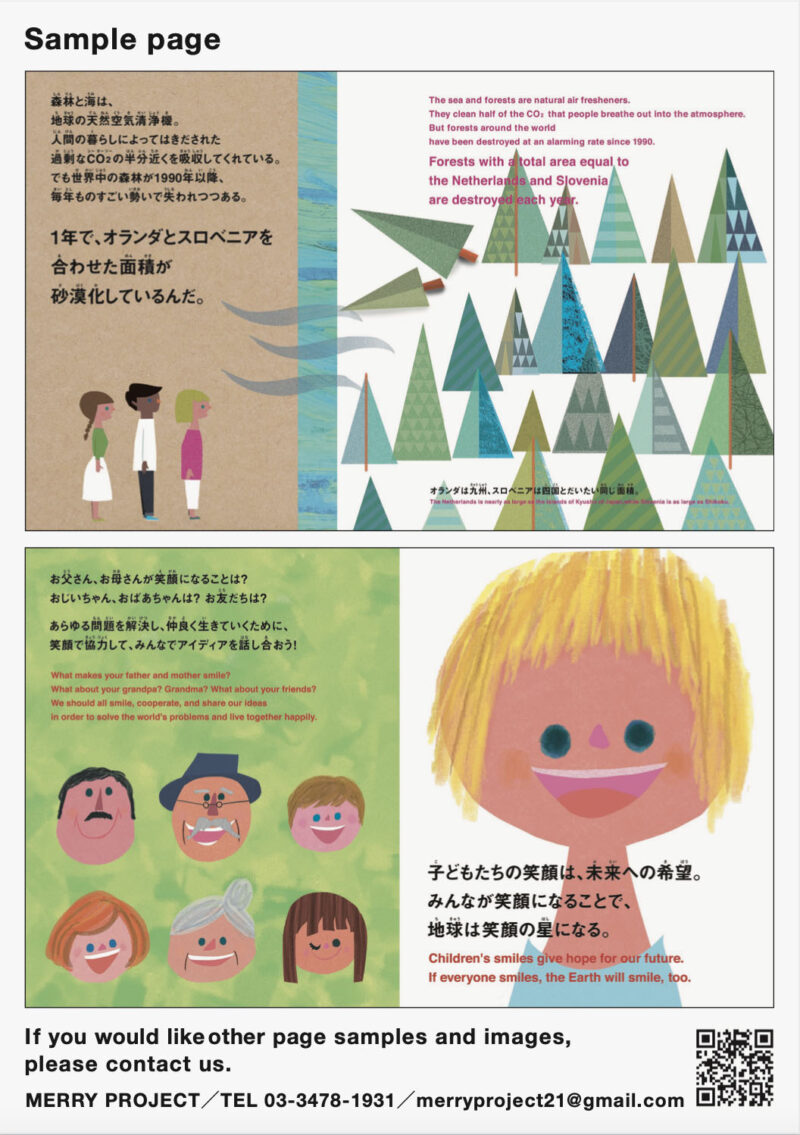 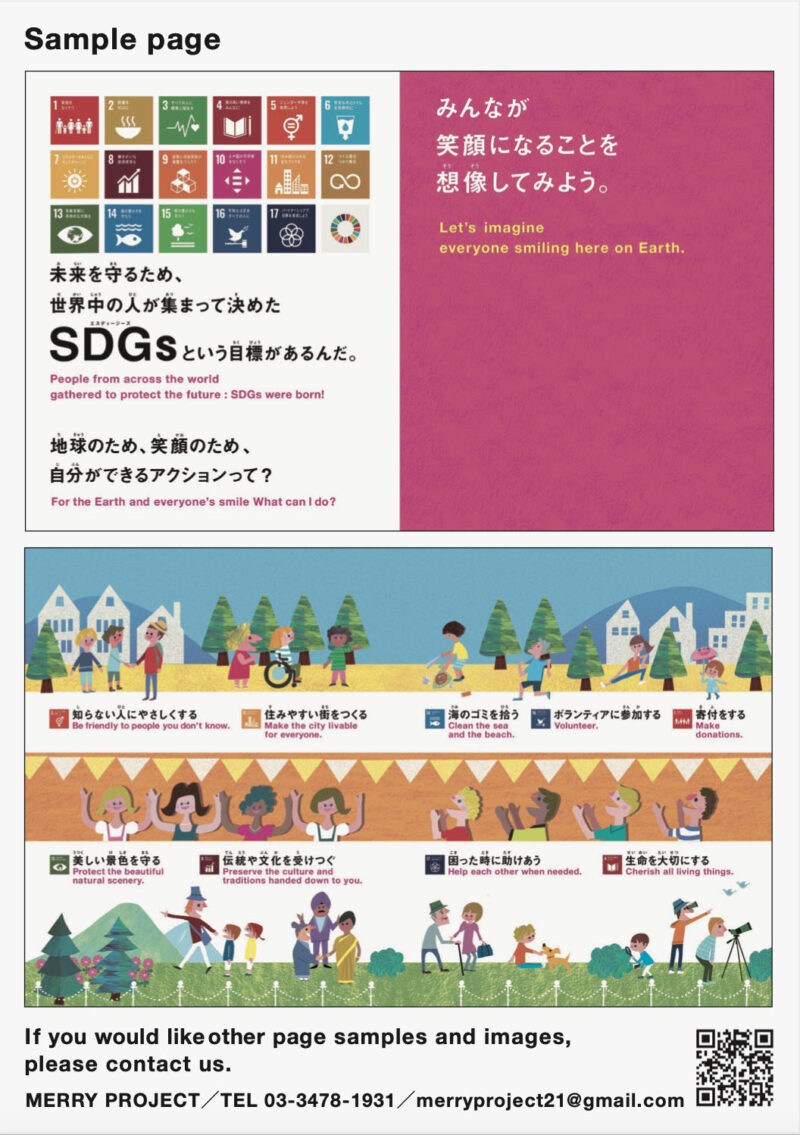 Merry project has photographed the smile of more than 50,000 people in 33 different countries around the world. Message book about “SDGs“ presented by the art director Koji Mizutani. 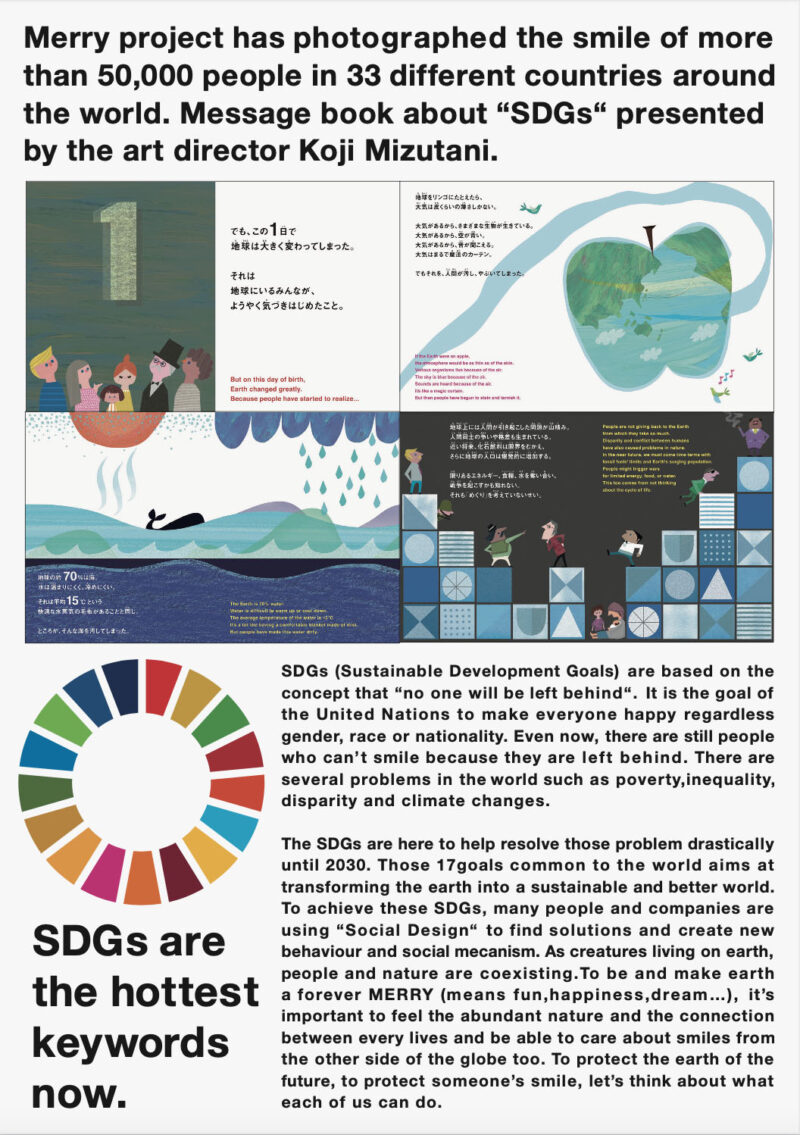 SDGs (Sustainable Development Goals) are based on the concept that “no one will be left behind“. It is the goal of the United Nations to make everyone happy regardless gender, race or nationality. Even now, there are still people who can’t smile because they are left behind. There are several problems in the world such as poverty,inequality, disparity and climate changes.

The SDGs are here to help resolve those problem drastically until 2030. Those 17goals common to the world aims at transforming the earth into a sustainable and better world. To achieve these SDGs, many people and companies are using “Social Design“ to find solutions and create new behaviour and social mecanism. As creatures living on earth, people and nature are coexisting.To be and make earth a forever MERRY (means fun,happiness,dream…), it’s important to feel the abundant nature and the connection between every lives and be able to care about smiles from the other side of the globe too. To protect the earth of the future, to protect someone’s smile, let’s think about what each of us can do. 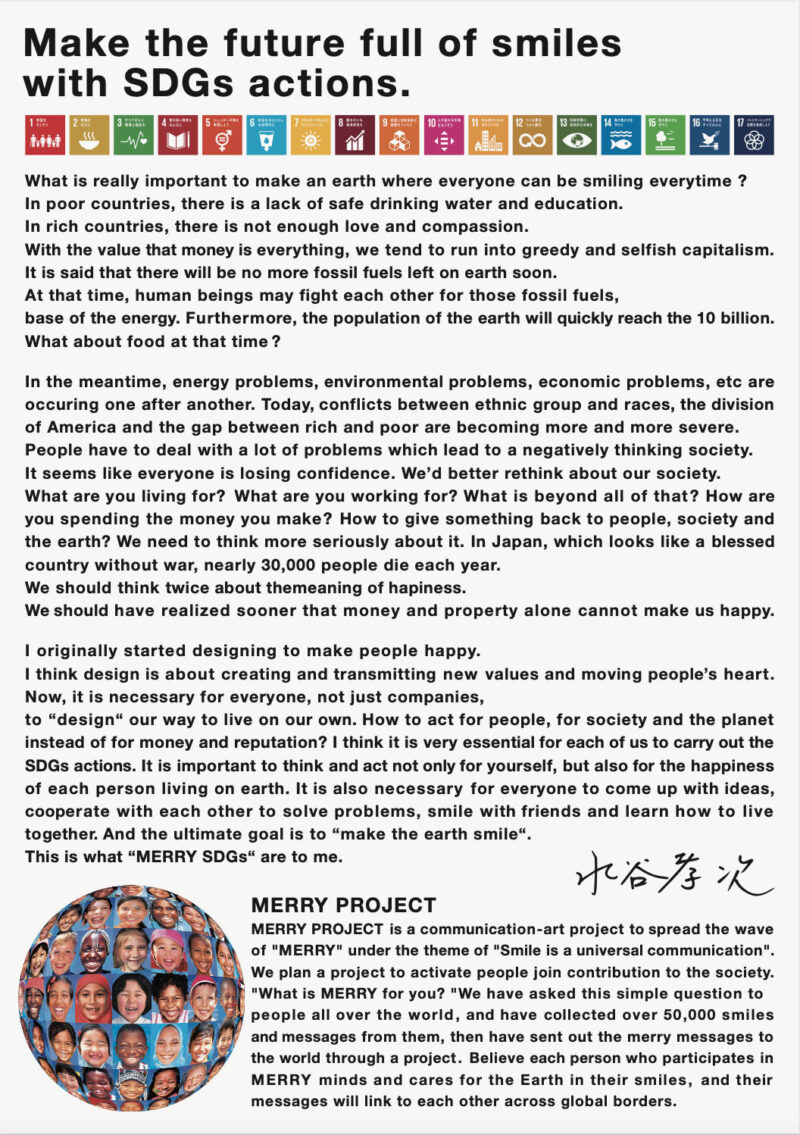 Make the future full of smiles with SDGs actions.

What is really important to make an earth where everyone can be smiling everytime ?
In poor countries, there is a lack of safe drinking water and education.
In rich countries, there is not enough love and compassion.
With the value that money is everything, we tend to run into greedy and selfish capitalism. It is said that there will be no more fossil fuels left on earth soon.

At that time, human beings may fight each other for those fossil fuels,
base of the energy. Furthermore, the population of the earth will quickly reach the 10 billion. What about food at that time ?

In the meantime, energy problems, environmental problems, economic problems, etc are occuring one after another. Today, conflicts between ethnic group and races, the division of America and the gap between rich and poor are becoming more and more severe. People have to deal with a lot of problems which lead to a negatively thinking society.

It seems like everyone is losing confidence. We’d better rethink about our society.
What are you living for? What are you working for? What is beyond all of that? How are you spending the money you make? How to give something back to people, society and the earth? We need to think more seriously about it. In Japan, which looks like a blessed country without war, nearly 30,000 people die each year.
We should think twice about themeaning of hapiness.
We should have realized sooner that money and property alone cannot make us happy.

I originally started designing to make people happy.
I think design is about creating and transmitting new values and moving people’s heart. Now, it is necessary for everyone, not just companies,
to “design“ our way to live on our own. How to act for people, for society and the planet instead of for money and reputation? I think it is very essential for each of us to carry out the SDGs actions. It is important to think and act not only for yourself, but also for the happiness of each person living on earth. It is also necessary for everyone to come up with ideas, cooperate with each other to solve problems, smile with friends and learn how to live together. And the ultimate goal is to “make the earth smile“.
This is what “MERRY SDGs“ are to me.